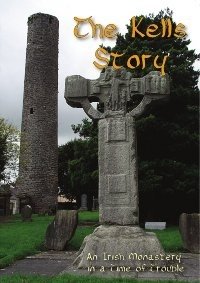 The Kells Story DVD: an Irish monastery in a time of trouble (DVD)

The Kells Story: An Irish Monastery in a Time of Trouble (DVD)

The story of one of Ireland's greatest monastic settlements is brought to life, in a manner never before revealed, in this newly re-released documentary.

The Kells Story: an Irish Monastery in a Time of Trouble delves deep into the monastic period of Irish history - a time when Ireland earned its reputation as 'the land of saints and scholars' - helping to lift Europe out of the period following the decline of the Roman Empire, often referred to as The Dark Ages.

During this period, Irish monks excelled in the study of Latin and Christian theology. Many scholars from other parts of Europe came to visit these Irish monasteries. The legacy of that period has been preserved, right down to the present day, in the form of illuminated manuscripts (e.g. The Book of Kells), metalwork (e.g. the Ardagh Chalice) and sculpture (e.g. the High Crosses, many of which date from at least 8th century and several of which, can be found within the town of Kells).

Narrated by several local historians, this documentary traces the early history of Kells: from its foundation around 804 AD, by monks fleeing Colmcille's monastery in Iona to escape Viking attacks, through its survival over a period of more than 600 years that followed. Contributors include Aidan Wall, Joseph Rourke, Rev Gerard Rice, William Carr.

The spirit of the ancient site of Kells, in the Irish county of Meath, is captured and its rich cultural legacy explored: from the world famous Books of Kells, the architecture and archaeological relics that dominate the landscape of the town right down to the present time, portraits of the personalities who were at the centre of monastic life in Ireland.

The story of Kells is integral to an understanding of the monastic period of Irish and European history. It is told here in a lively, inventive, educative and entertaining manner, which will leave you wanting more.

Reviews for this DVD