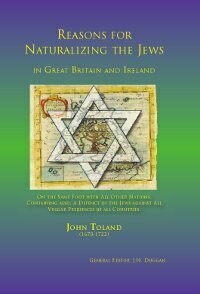 Reasons for naturalizing the Jews in Great Britain and Ireland, On the same foot with all other Nations. Containing also A Defence of the Jews against All vulgar Prejudices in all Countries

First published in 1714, shortly after the succession of George I to the British throne, Reasons for Naturalizing the Jews in Great Britain and Ireland is widely seen as a landmark work in the movement for emancipation and equal citizenship of the Jewish people.

While some would argue that the case being presented by Toland is best understood in the context of British political life of the time, it is generally agreed that it represents a remarkable work: one that, in many ways, is well ahead of its time.

Toland's work has been seen as influential on a number of fronts. It shows Toland as a skilled and fearless commentator; one who accepted nothing at face value but always brought an independent mind to bear on any issue he tackled:

"A dog will run at a stone, when he dares not attack the man that threw it."

"I am not ignorant how much the world is governed by prejudices, and how farr some, who wou'd not be counted of the vulgar, are yet sway'd by vulgar errors. ... But one rule of life, which is willingly admitted, nay, and eagerly pleaded by all Societies in their own case (tho miserably neglected in that of others) is, not to impute the faults of a few to the whole number."

The Foreign and Protestants Naturalization Act of 1709 allowed immigrants to claim British citizenship upon swearing an oath of allegiance to the British throne, and taking the sacrament in a Protestant church. In this pamphlet Toland is calling for the same privileges to be extended to the Jews.

This edition of John Toland's pamphlet has been faithfully reproduced from the original with an Introduction, editor's notes and a Chronology of Toland, his life and times. Previously available only in facsimile editions, the text has been reset using a modern typeface but with original spelling, emphasis and formats preserved.

Currently available only in Kindle format from Amazon – see above