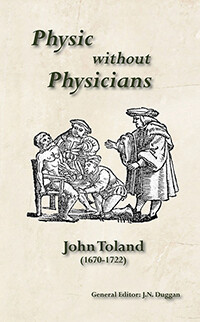 Physic without Physicians by John Toland

For the last four years of his life, John Toland lived in Putney, then a parish outside London, where he took lodgings with a carpenter, Edward Hinton. It is here that he wrote a number of his important works, including Pantheisticon. When he died, on 11 March 1722, he left a legacy said to consist of not much more than "150 manuscripts piled high upon two stools."

Following his death, A Collection of Several Pieces of Mr. John Toland, in two volumes, appeared in 1726. The collection is described as "first published from his original manuscripts with some memoirs of his life and writings."

These memoirs were written by Pierre des Maizeaux, an exiled French Huguenot living in London, who describes the last years of Toland’s life in the following terms:

Mr Toland had for above four years past liv’d at Putney, from whence he cou’d conveniently go to London and come back the same day; but he used to spend most part of the winter in London. Being in town about the middle of December, he found himself very ill; having been lingering for some time before. His appetite and strength fail’d him: and a certain Doctor, who was call’d to him made him a great deal worse, by bringing a continual vomiting and looseness upon him. However, he made a shift to return to Putney, where he grew better, and had some hopes of recovery. In this interval, he writ a Dissertation* to shew the uncertainty of Physic, and the danger of trusting our life to those who practise it: while by our own care and experience we might easily provide such medicines as are proper and necessary for us.

*That Dissertation, intitled Physic without Physicians is printed in this Collection, Vol. II. pag. 273

The arguments presented in Physic without Physicians invoke the ancient writings of Pliny the Elder and Hippocrates (of the latter, he says, “we may as successfully batter Quackery by his authority, as we do superstition by that of the Bible.”) as well as some contemporaries, such as Herman Boerhaave and Richard Mead. Taken as a whole, it could be considered, not so much as a reflection upon medical knowledge in itself (“which is the gift of God and Nature”) but rather, the limitation of its practitioners and counsels that ultimately, people should take responsibility for their own health.

Currently only available in Kindle format from Amazon – see above