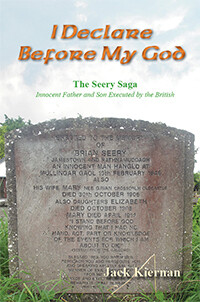 I Declare Before My God: The Brian and James Seery Story by Jack Kiernan

I Declare Before My God: The Brian and James Seery Story by Jack Kiernan

Twin tales of 19th century miscarriages of justice, resulting in the deaths of a father and a son: both sentenced to hang in entirely separate circumstances, on different days 24 years apart and, even on different continents.

Brian Seery was executed in Ireland on 13 February 1846, outside Mullingar Gaol, having been charged and found guilty of the attempted murder of Sir Francis Hopkins, a local landlord. This was in spite of what a contemporary observer, the author, Charles Dickens described as, "extremely questionable evidence and his own persistent protestations of innocence."

When Brian Seery died, he left behind a wife and a young family of five, including a son, James, later to be sentenced to death in Australia, where he had moved to find work in the goldfields of the Gippsland region of Victoria. Charged and found guilty of the murder and mutilation of a body, he was sentenced to hang and executed on 14 November 1870, aged just 33 years.

James Seery, like his father before him, was sent to an early grave under very questionable circumstances. In the view of author, Jack Kiernan, in the Ireland or Australia of today, neither case would get into court.

Once again, Jack Kiernan carefully assembles the available evidence in a manner that lets the reader decide while, at the same time, leaving no doubt as to how he views the circumstances and the judgements that were handed down. He also offers a stinging critique of the colonial and Ascendancy mindsets and attitudes that resulted in many such travesties of justice.