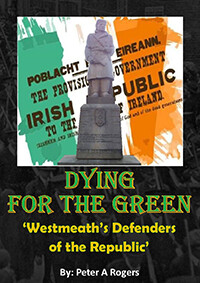 Dying for the Green: Westmeath's Defenders of the Republic by Peter A. Rogers

Dying for the Green: Westmeath's Defenders of the Republic by Peter A. Rogers

In the early 1900s, there was an attempt by Irish Nationalists to regain their sovereignty and freedom from Great Britain with an armed Rising in 1916, followed by a War of Independence during the years 1919 until 1921, when peace negotiations began, resulting in a Treaty signed in December 1921. Ireland was partitioned as a result of this Treaty. This book documents information and recounts actions of men from County Westmeath, who fought and died during this and subsequent periods in the fight for Irish freedom.

"As a soldier of the Irish Republican Army, I am not afraid to die, as I am doing it for a just cause." – James McCormick, Mullingar, Co. Westmeath, 1940

Two quotes from little-known IRA Volunteers, from either end of County Westmeath and from two different eras of the Irish Republican struggle for total independence from Britain. Both men were executed for staying loyal to the All-Ireland Republic declared on the steps of the General Post Office in 1916. One was executed by his own countrymen and the other by the British authorities. The stories recounted in this book, of young men from the midlands who joined the Irish Republican Army, demonstrate that they were not only wholehearted and fearless in their military engagements but also dedicated and enthusiastic soldiers of that Republic to the end. Their humility in death is also without question and a testament to their commitment to that cause, without showing any malice towards their executioners.

The Lake County would not run off the lips of many when speaking of the fight for Irish freedom but, as you will see from this book, that men from Westmeath were not only at the coalface of the fight in their own country but many died in high profile events in other parts of Ireland. Men remembered in song, like James Tormey, who were among the most wanted across Ireland, his name being listed in the company of Dan Breen and Tom Barry in the R.I.C. Barracks across Ireland during the years 1920 to early 1921.

This book sheds new light on some long-forgotten, selfless patriots who gave everything for their country. Each story full of courage, heartbreak, suffering and tragedy, brought to life on these pages. An insightful read, full of detail and well researched information to the last page. A tribute to its author with its contents being very helpful to those wishing to research and understand Ireland’s turbulent history.

Currently only available in Kindle format from Amazon – see above