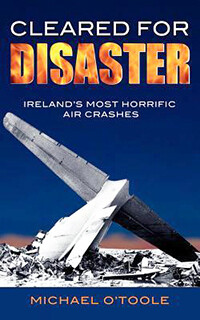 On Sunday morning, 24 March 1968, horified people in the southeast of Ireland watched as a massive plane hurtled along at 200 miles and hour, so close to the groudn that passengers in the doomed aircraft could be seen crouching forward in their seats. Just minutes later, it ploughed into the sea … there were no survivors.

In those rare instances when things go seriously wrong in flight, the results are usually horrific. From the days when the long crossing to New York from the new land base at Rineanna, Shannon was a high adventure, aviation writer, Michael O'Toole explores twelve of Ireland's most horrific air crashes.

Casting an experienced eye over the causes, lives, tragedies, skill, bravery, heroism and human error involved. O'Toole tells the full story of each crash, from the fateful take-off when they were 'cleared for disaster'.

Journalist and author, Michael O'Toole worked as aviation correspondent for the Irish Press group of newspapers in the 1960s and 1970s. He was a news editor and long-time Dubliner's Diary columnist with the Evening Press. He also worked for the Evening Herald, the Daily Telegraph, RTÉ and the BBC and was Ireland correspondent for The Tablet for a number of years. He wrote and broadcast widely on aviation matters up to his death in April 2000. He is survived by his wife, Maureen.