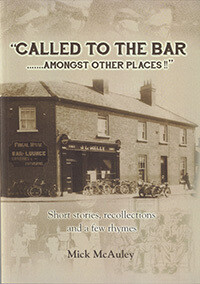 A book of short stories, recollections and a few rhymes.

We sat there under our usual corner of the old bar of the old stags head. He had gazed down on many a man over the years. Nobody passed much remarks upon him, except, maybe to say that if only he could talk, he'd have some stories to tell. Nobody knew how he came to be there, who shot him (that is, if he had been shot) or where he came from. But there was something a little comforting about him: we knew he was there and we always looked upon him as a sort of friend, and very much part of the old bar. The few bar-stools under his watchful eyes tended to be the most popular in the bar.

Called to the Bar … amongst other places by Mick McAuley
Anthology, literary, humour, poetry and prose
148 printed pages, paperback
First published in Ireland in 2015