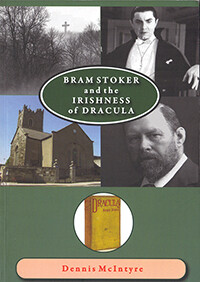 Bram Stoker and the Irishness of Dracula by Dennis McIntyre

Bram Stoker and the Irishness of Dracula by Dennis McIntyre

Bram Stoker has long been recognised as a true master of the horror genre and has rightly won acclaim for his creation, Dracula, the world’s most enduring vampire story. However, the inspiration and origin of Stoker’s masterpiece has long bedevilled scholars and devotees alike and, many theories abound, including the plethora of possible Irish influences. Dennis McIntyre has, for many years, been to the fore in espousing Stoker’s Irish identity and, by extension, the Irish influences he brought to bear on his masterpiece. McIntyre’s amazing detective work has brought this hypothesis to a new level, in this timely and splendid publication, in which he expertly explores and analyses these in considerable detail and draws thought-provoking conclusions for the benefit of readers. The author’s expertise too, as a local historian, is clearly evident throughout this valuable publication and, has left no stone unturned in this brilliant contextualisation of events across the full spectrum of 19th century Irish society, to argue his case. ... This is a most welcome volume for both scholars and readers. – John Moore ( International Stoker scholar, connoisseur and bibliophile)

Once in a while, a book comes along that is definitive in its subject matter – this is such a book. The author has unearthed many slants and angles on Dracula’s origin but, of particular interest is the revelations concerning Stoker’s mother’s connections with Longford House and those winding Ox Mountain roads.