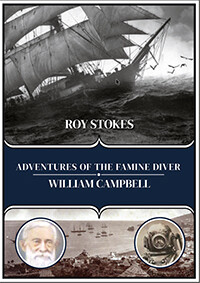 Adventures of the Famine Diver, William Campbell by Roy Stokes

Adventures of the Famine Diver, William Campbell by Roy Stokes

This is the story of man who lived two lives. From his birth, in 1813, he spent the first fifty years of his life in Scotland and Ireland. To this day, none of his descendants have ever understood why he travelled to and spent the second half of his life on the other side of the world – down under.

However, the first half of the 19th century was also a period during which millions were on the move, crisscrossing the globe in emigrant ships in search of fortune, which for many simply meant a job and a life.

William Campbell would remain an obscure contractor until the Press began to flatteringly describe him as an ‘Accomplished Diver’ or ‘The Talented Diver’ and even as ‘The Celebrated Diver’. A salute to his abilities and profession, they were glowing compliments afforded to few divers of the period but, Campbell was more than just a diver.

Crossing paths with historical and well-known public figures of the time, and working first hand with technological innovations of the Victorian period, William Campbell experienced more than a fair share of danger and adventure. Travelling throughout Ireland during one of the darkest periods of its history – the Great Famine – and eventually becoming the Superintendent of Works at one of the biggest harbours in Europe, Kingstown Harbour, is Mr Campbell’s story: the first half of it at least.

The second half of Mr Campbell’s life began after the whole family, quite suddenly, upped stakes in Ireland and travelled, by various adventures, to the other side of the world. Although they were amongst the founding fathers, little personal history of this Campbell Clan and Streaky Bay, Adelaide, South Australia survive. Nevertheless, Campbell’s latter life is now well known, having been documented by his family, friends and by the communities in which he and his family lived.

Roy Stokes is an author, historian and diver who has been researching maritime history and exploring shipwrecks since 1981.

Other published works include Between the Tides: Shipwrecks of the Irish Coast (2015); U-Boat Alley: The U-Boat War in the Irish Channel during World War I (2004); Death in the Irish Sea: The Sinking of the RMS Leinster (1998).

His website, Irish Wrecks provides data on over 15,000 shipwrecks off the Irish coast while Ouzel Galley contains a wealth of stories and information relating to maritime and seafaring in general.

A Kindle compatible edition of this e-book is available from Amazon and Amazon UK, along with other Amazon domains

Kindle devices are available to purchase online from Amazon and Amazon UK, along with other Amazon domains

In the Adventures of the Famine Diver, William Campbell we are transported back to mid-nineteenth-century Ireland, to follow the career of one of the prolific underwater divers of his time. … The author succeeds in presenting a wonderful compendium of Campbell’s life in Ireland and the world in which he lived. – Dublin Inquirer

Barry Duncan Gibbons was born in Kinsale, Cork in 1798. He began contracting as an engineer in public works with the Board of Public Works in 1828 and continued right through the period of the Great Famine. … Gibbons was resident engineer during the final construction stages of the Royal Harbour, Kingstown. … Barry Gibbons, a Catholic, could not have accomplished all that he did by himself and was joined by a number of like-minded colleagues of progress and an army of skilled craftsmen. One of these men was William Campbell, a Scottish Protestant, born in 1813, who returned to Ireland after working on the pier in Portpatrick between 1838-1840. He was a carpenter, bell and marine diver and an expert at underwater demolition and salvage. He was also a skilled stone mason, leaving evidence of his talent around Ireland in the wonderful old stone harbours still surviving. Campbell remained at Gibbons' side from the time he first contracted to him for Public Works at Ballycotton in 1846. He worked on Gibbons' New Pier and also supervised the construction and completion of the magnificent RNLI cut stone lifeboat house, lying alongside the East Pier, in 1862. – Southside People, 4 November 2020