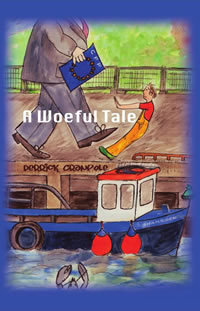 A Woeful Tale by Derrick Cranpole

A Woeful Tale by Derrick Cranpole

Derrick Cranpole discovered poetry during his time at sea, which took him from the Arctic to the Southern Ocean and from the Americas to the Red Sea. Remembering bits of verse helped pass the long watches of the night.

Back in the early sixties, Cranpole found himself on the deck of a lobster boat. Despite many ups and downs he stayed at the fishing and he loved every day of it.

Now, he brings together a collection of his own poems, recording his observations of life in a fishing community on the south coast of Ireland.

Cranpole's poetry has been described as "ironic, sometimes blunt", particularly when shining the light on an infuriating bureaucracy and officialdom that presides over the EU's Common Fisheries Policy. He deals with everyday problems (at sea and on land) of seafarers, fishermen, residents of coastal communities. His manner is forthright but always in a humorous vein. He never flinches from championing the cause of the underdog.Some have even detected "a touch of the Kiplings" in his light-hearted poems and sketches.

Many of his poems have appeared in The Marine Times, Fishing News, Irish Skipper, Inshore Ireland and some have been aired on radio!

A print-on-demand edition of this book is available from Amazon, Amazon UK as well as other Amazon domains.


Reviews for this Book

Over the years I have known a lobster fisherman from the South-East, a man fond of a bit of ironic, sometimes blunt poetry or ditties, particularly when he was infuriated by official policies on fishing. – Tom MacSweeney, Marine Times

Referring to the fishing industry and maritime matters especially in the South East (it is) a mainly humorous comment on the maritime society of the area and its 'official regulators'. – Ciarán O Mullain, Marine Times

He deals with everyday experiences of sailors and of the issues concerning seamen from bad weather to the EU's common fishery policy. When not dealing with such serious matters, his poems are funny and light-hearted as are also the sketches used to illustrate the book. Here and there we even detected a touch of the Kiplings. – Books Ireland, March 2012.

There are moments of delight and hilarity here amidst all the commentary and invective. Cranpole has a humorous touch which he displays with both candour, vigour and charm. The people who ought to read these poems probably never will. The people whom it will appeal to are those who have experienced the life of the open sea, those who have wondered what it all must be like, and anyone who has ever had to deal with public officials whose view of life comes across as remote and unconcerned. – A. Reader 14/01/2012 21:51:19